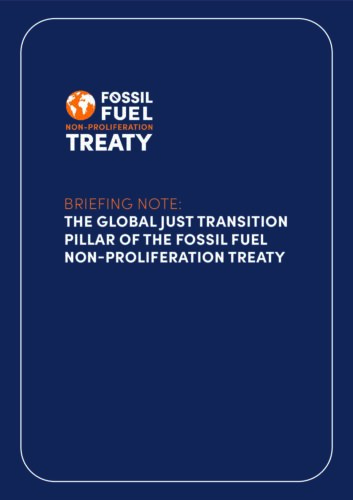 This brief was produced by Niclas Hällström WhatNext? for the Fossil Fuel Treaty, outlining key features of the Global Just Transition pillar of the treaty.

The Fossil Fuel Non-Proliferation Treaty Initiative1 recognizes that the climate crisis poses an existential threat as serious as the threat of weapons of mass destruction.

Addressing this threat requires comprehensive responses, like the way the world negotiated nuclear disarmament treaties, and a clear focus on phasing out the production2 of fossil fuels in line with the 1.5°C global climate goal.

Drawing on the analogy of the Nuclear Non- Proliferation Treaty, the treaty’s three Pillars would prevent the proliferation of fossil fuels by ending all new exploration and production; phase-out existing production in line with equity and 1.5°C; and fast track real solutions and a just transition.

The goal would be to enable the rapid, equitable and comprehensive transformation needed to ensure a safe climate, healthy economy, and sustainable future for all people.

This brief outlines a possible framework of the Global Just Transition pillar, with the aim to stimulate further discussion and dialogue towards the overall design of the proposed Treaty.

The Brief contains the following sections: