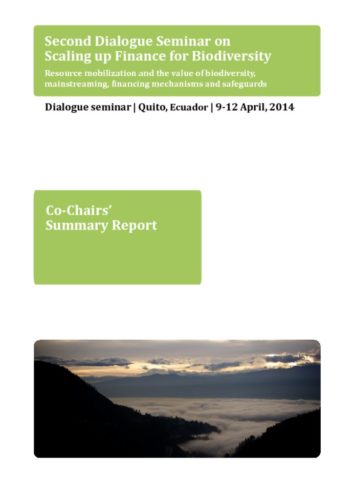 The second Quito dialogue seminar was held in 2014 to prepare and facilitate the formal CBD COP12 negotiations in South Korea later in the year. The purpose of the dialogue seminar was to explore ways to scale up the mobilization of financial resources to support the achievement of the 2020 Aichi Biodiversity Targets, contribute to shared understanding and seek to clarify areas of convergence and divergence of views.

The Second Dialogue Seminar on Scaling up Financing for Biodiversity took place from 9-12 April, 2014 in Quito, Ecuador. The conveners were the Governments of Ecuador, Norway, India, Japan, the Republic of Korea, Sweden, Uganda, the European Commission and the Secretariat of the Convention on Biological Diversity (SCBD). It was organised by the Resilience and Development Programme (SwedBio) at Stockholm Resilience Centre with assistance from the local partner IUCN-Sur, and SCBD, with economic and in-kind support of the Governments and agencies of Ecuador, Sweden, Norway, Japan and the European Commission. Nearly 90 participants attended the dialogue from all regions and included government representatives, members of civil society organisations, intergovernmental institutions, academia, and indigenous peoples. Participation was based on nominations received from Parties and Non-parties through the CBD Secretariat.

The purpose of the dialogue seminar was to explore ways to scale up the mobilization of financial resources to support the achievement of the 2020 Aichi Biodiversity Tar- gets, contribute to shared understanding and seek to clarify areas of convergence and divergence of views. The context of these discussions is the CBD strategy for resource mobilization and related decisions, such as decision XI/4 and Aichi Biodiversity Targets 2, 3 and 20 on integration of values of biodiversity into national planning and reporting processes; eliminating or phasing out harmful incentives and mobilization of resources for effective implementation of the Strategic Plan for Biodiversity 2011-2020 respectively.

The specific objectives of the dialogue seminar were to contribute in building trust and mutual understanding of different views and perspectives on values of biodiversity; review ways and means to mainstream and integrate different kinds of values of biodiversity in national planning, decision-making and multilateral processes; and seek enhanced understanding of various ways of operationalising mechanisms for mobilizing financial and non-financial resources, including principles and safeguards for their implementation.

The seminar contained sessions on:

Upon request by participants, a session on Access and Benefit Sharing (ABS) and a presentation by the COP12 host Republic of Korea on the preparations for COP12 were added. Each session was followed by plenary and group discussions for enhanced clarifica- tion and understanding, and to allow opportunity for the participants to freely discuss any issue of relevance to the sessions. The co-chairs gave a recap at each day’s opening.

There was a considerable level of common ground on many of the topics covered in the dialogue. It was widely recognised that biodiversity is a fundamental basis for our economies, our societies and people’s prospects for well-being, is a central argument to ensure financing for biodiversity. It was acknowledged that valuation of biodiversity can be done using a number of methods, from dialogues with relevant actors that communicate and demonstrate qualitative values to valuation in quantitative and economic terms. Participants thought that monetary valuation can facilitate visibility, but that it is not always possible since not all aspects of biodiversity values may have monetary values attached to them, and it may also be seen as inappropriate if relevant knowledge is lacking or due to ethical reasons related to different worldviews and cosmovisions. Economic arguments were seen to complement but not replace other arguments for increasing financing for biodiversity. Methods such as community based monitoring and information systems were also recognised as valuable tools for assessing and monitoring biodiversity values. It was also clear that valuation of biodiversity is complex and multifaceted, thus requiring input from experts and experiences from different dis- ciplines and practices. Indigenous peoples and some countries spoke about the need to recognise non-Western knowledge systems, rights of Mother Earth and ‘Buen Vivir’. Several participants expressed the need for a values-driven development, in terms of moral and ethical stance, and maintained that biodiversity has intrinsic value.

The seminar discussed how much biodiversity finance is really needed for imple- mentation of the Strategic Plan, taking into account the current work by the High-level Panel on Global Assessments of Resources. It was emphasised that the task is not just to make more biodiversity-specific funding available, but ensuring that other activities do not harm biodiversity. This means that biodiversity should be integrated into budgeting, development plans and sustainable practices in other sectors. Efficiency in the utilisation of available financial resources is also important. Institutional and policy failures, worldwide, were noted to often be a larger obstacle than the lack of new resources.

The important role of fiscal reforms was discussed, including redirection of harmful subsidies to positive subsidies for biodiversity, working with green incentives and tax- es – both income taxes and new forms such as financial transaction taxes and air ticket levies, as well as curbing tax evasion. The important role of business was recognised – both in terms of Corporate Social Responsibility (CSR) activities, and also the need to change business models, to avoid causing harm and for development of sustainable practices.

There were extensive discussions around mechanisms such as Payments for Ecosystem Services (PES), biodiversity offsets, compensation and markets. It was recognised that there is a need for clearer terminology as controversies and disagreements around these issues relate both to language as well as real divergences based in different world-views. As an example, the word compensation is in some contexts used for PES and in some contexts used for offsets; the differences depend both on language and country context.

It was recognised that most PES systems are publically driven and publically financed. It was also pointed out that PES systems need to build in the issue of opportunity costs and sustainability, for such schemes to succeed in the long term.

The majority of biodiversity offset schemes are strictly government regulated, with the level of compensation determined by the regulatory authorities rather than by market mechanisms. It was discussed that biodiversity offset schemes succeed best if there is a legal regime that makes them mandatory for companies or individuals, and that voluntary offsets may fail in practice. It was furthermore proposed that the term ‘offsets’ be avoided when talking about non-market biodiversity compensation (in order to avoid misguided associations with carbon trading offsets). It was discussed that compensation, if acceptable, should only follow as a last resort after a strict application of the ‘mitigation hierarchy’, and that compensation needs to take place as close as possible to the area of exploitation. It was noted that in contrast to carbon offsets, it is difficult to find a common metric or unit in biodiversity offsets. It was also suggested by some that more knowledge on the different ways to calculate measures related to offsets is needed. It was observed by some participants that compensation schemes could, if well implemented, be a useful tool for implementing the polluter pays principle and for avoiding net loss of biodiversity. Several examples of biodiversity compensation schemes as applications of the ‘polluter pays principle’ were given in both presentations and group discussions. It was concluded that in order to work, they need strong public institutions and regulations to safeguard biodiversity, ecosystem services, and related social outcomes. Concerns were however raised that compensation schemes could incentivize excessive allocations of permits to exploit and an avoidance of critical questions around what is ‘unavoidable’ and alternatives to extraction, that they may not provide new financing for biodiversity (only ‘no-net-loss’), and that they could have adverse impacts on local peoples’ livelihoods.

The term ‘markets’ and different kinds of markets were discussed, as were the different degrees of commodification and also financialisation, i.e. secondary markets and trad ing with derivatives. Some participants highlighted opportunities around markets and new financial products as ways to raise additional financing for biodiversity. Others expressed concern regarding offsets trading markets and financialisation of biodiversity, pointing to risks related to speculation, quality assurance, and impacts on local peoples’ livelihoods. There was widespread recognition that these issues need deepened understanding and further discussion and debate.

It was also discussed that the term ‘innovative finance mechanisms’ (IFMs) is mis-leading since very few of the mechanisms are in fact innovative – most have been in use for a long time, and most countries already apply one or several. It was suggested that other terms should be used instead, such as biodiversity finance mechanisms (BFMs) or environment policy/economic instruments more generally. It was widely recognised that these financing mechanisms can play an important role in reaching the financing targets. It was highlighted that these mechanisms need to be country specific depend- ing on the nature, culture, politics and economies in the different countries. Participants pointed out the importance of understanding the scope and scale of each of finance mechanism, their advantages and disadvantages. It was also suggested that an extensive overview be compiled of the many different kinds of mechanisms and instruments that exist, and how they have been applied and worked.