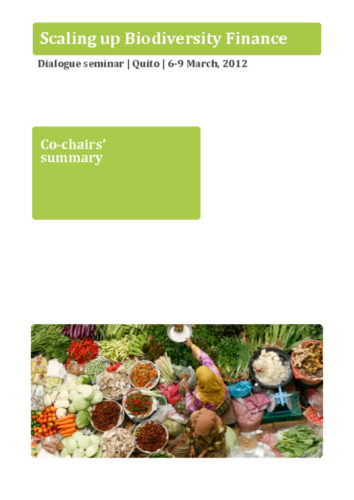 Report from multi-actor dialogue seminar aimed at clarifying and enhance understanding of the different perspectives surrounding controversies on biodiversity financing. As contested issues such as payments for ecosystem services, biodiversity offsets and 'innovative financial mechanise' had nearly crashed the Convention of Biodiversity negotiations, the Quito seminar aimed at enhancing prospects for agreements at next COP.

The purpose of the Dialogue Seminar on Scaling up Biodiversity Finance, 6-9 March 2012, in Quito, Ecuador, was to explore and contribute to understanding and seek to clarify areas of convergence and divergence regarding ways to scale up the mobilization of financial resources to support the achievement of the 2020 Aichi Biodiversity Targets. The dialogue covered the broad area of financing for biodiversity, including the role and nature of “innovative financial mechanisms” (IFM). The seminar did not intend to draft formal recommendations, but rather sought to enhance understanding among participants with a view to facilitate discussions at WGRI-4 in Montreal in May 2012 and COP-11 in Hyderabad, India, in October 2012. The seminar included a mix of keynote presentations, case studies and small group discussions.

The convener countries constituted a steering group for the seminar. Maria Schultz from Sweden and Mr MF Farooqui from India were co-chairs of the dialogue seminar.
The dialogue resulted in fruitful discussions and improved understanding. Several lessons learnt on scaling up _inance for biodiversity were presented at the seminar and are outlined in this report. Associated terms were discussed, and the choice of terminology might be important for the further development of this topic. Many participants found the term “innovative _inancial mechanisms” inappropriate, as it covers a wide variety of mechanisms, including both public and private approaches, and both established and truly new alternatives. As a constructive suggestion to avoid misunderstandings it was proposed that a generic term such as “biodiversity _inancing mechanisms” (BFMs), rather than “innovative _inancial mechanisms”, could be used and that it would help to name speci_ic mechanisms when possible. Likewise, many felt the expression “markets for biodiversity” should be avoided as this general concept includes a broad range of schemes (e.g. from local markets of certified products to “financialization”, see below) and that in any discussion of markets, it is important to be clear about what kind of market is being discussed.

Discussions around “values” were fruitful, although there was a span of views. The “Rights of Mother Earth”, as presented by some Latin American countries and indigenous peoples, were seriously discussed and considered, and monetary valuation became further clari_ied with more nuanced understandings. While some object to setting a monetary value on nature and natural processes, others think it is acceptable to do so as an input to decision-making. Others go further and _ind it appropriate to set prices for buying and selling “ecosystem services”.

Almost all issues discussed during the seminar concerned the institutional, political, social and cultural framework in which the biodiversity financing mechanisms operate. These frameworks determine the performance of the mechanisms. Good governance, rights-based frameworks and establishment of safeguards are thus concluded to be key prerequisites for the functioning of any biodiversity financing mechanism. There was an understanding that whether mechanisms are appropriate or not depends on institutions and governance in the specific political, social and cultural context. It is thus important to recognize that communities and countries have a right to refrain from using mechanisms they consider inappropriate, and develop mechanisms they consider appropriate for their specific context.

Initiatives regarding needs assessments for reaching the Aichi Biodiversity Targets were presented, such as the CBD’s GEF Needs Assessment, the UK/India High Level Panel Assessment on Financial Flows and the UNDP-EC Global Biodiversity Finance Project. Current global assessments indicate needs many times the size of the current commitments, thus justifying the current conversations on how to significantly scale up biodiversity financing. It was also recognized that there is a need for financial resources at the country level for such activities as capacity building, to raise awareness, to improve mainstreaming, to integrate biodiversity values into planning, national accounting, when appropriate, and in reporting systems. Bottom-up needs assessments were also explored, with reference to examples of specific country needs and success stories of sustainable use and conservation through certification and cooperatives. It was recognized that a significant part of funding needed for reaching the Aichi Biodiversity Targets is related to tackling underlying drivers of biodiversity depletion, such as unsustainable consumption and trade, unsustainable agriculture and harmful subsidies, and thus involves many sectors other than the environmental sector and ministries, and that a targeted approach towards negative drivers could, if successfully implemented, reduce the overall financial resources needed.

A general understanding from the seminar is that for resource generation, public fiscal measures and reforms are key, including but going beyond ODA. Fiscal reforms such as taxes seem to be a cost-effective instrument to generate resources, and much can be learned from existing cases. The shifting of taxes from, for example, labour to environmental damage and resource depletion can have multiple benefits. There also seemed to be some interest in exploring new mechanisms, not yet available, such as the establishment of an International Biodiversity Tax and financial transaction taxes (FTTs), which could generate resources for common public goods such as biodiversity. There seemed to be much agreement on the need for, and potential of, redirecting harmful subsidies to biodiversity enhancing investments.

It was widely recognized that the business sector has an important role to play both as a change agent and as a source of tax revenue. Positive development regarding the business sector can be promoted through increased transparency, corporate social responsibility and the use of tax incentives and disincentives, but is fundamentally linked to the existence of clear rules, norms and regulations. In terms of resource mobilization for biodiversity there seemed to be a general understanding that the scope for direct private investments is rather limited because the benefits are often public goods and difficult to capture by the private investor. In existing public-private partnerships (PPPs) for biodiversity, public funds provide seed money for companies to make them change or engage in new sectors. Some partnerships have, however, been seen as inappropriate subsidies to business and thus been accused of causing trade distortion.

Regarding delivery mechanisms, the seminar had a strong focus on the importance of relevant institutions. The core message from the report submitted by Norway – “Can Markets Protect Biodiversity?” by Professor Arild Vatn – seemed to have a considerable impact on the meeting. He concluded that markets for biodiversity are challenging to establish and run. Transaction costs are high and, as biodiversity is a public good, free-riding is a problem. Government actions are, hence, not only important for setting up and maintaining markets. He also showed that for most new biodiversity-related market mechanisms, governments were still the sole or primary provider of finance. In the case of “payments for ecosystem services” (PES) almost all of the buyers of the services (99% in developed countries and 97% in developing countries) have been governments.

Regarding mechanisms such as PES the seminar showed that many of the reasons for whether a mechanism is acceptable or not, are dependent on the particular institutional, rights and community participation context. Case studies demonstrated that without the appropriate institutional frameworks and compliance mechanisms, PES schemes can lead to loss of livelihoods and loss of communities’ control over their natural resources. In more institutionally appropriate contexts, communities have benefited, and multi-sectoral strategies have both enhanced community development and led to biodiversity benefits.

There was less experience of the newer biodiversity financing mechanisms such as bio-banking, tradable development rights and forest bonds.

Related to this point, some participants raised concerns that the creation of new biodiversity markets could lead to a process of “financialization” of biodiversity. Financialization is used as a term here to describe international trading in abstract and derived products related to biodiversity in contrast to regular trade in goods and products. The financialization market is defined and driven by the financial sector intermediaries such as special investment firms, hedge funds, banks and insurance companies, which have extensive experience of trading in risk management connected to derivatives and financial transactions. With the increasing complexity of the international financial markets, with multiple levels of transactions and bundling of assets, it is feared that such financing may both divert funding for biodiversity and impose restrictions on the informal user rights of local communities. In this way financialization can have unintended negative impacts on local communities, biodiversity and the financial system at large, and thus warrants further analysis.

There was general agreement among participants that the dialogue seminar had contributed to a high degree of common understanding and convergence around many issues, as well as on the overall approaches to the challenges of scaling up biodiversity finance, that participants understood each other’s viewpoints better, and that there was much to build upon in the coming negotiations.

Overall, there seems to be a need for further elaboration and understanding of the many issues and concerns raised during the dialogue seminar. One suggestion made at the meeting was to consider requesting the CBD Secretariat to compile a more comprehensive report on lessons learned and possible risks and bene_its of biodiversity financing mechanisms, with clear definitions of terminology used.

The overall conclusion from the seminar is that economic incentives can play an important role for reaching the Aichi Biodiversity Targets and that governance and institutional frameworks, including safeguards, are critically important for all financing mechanisms for biodiversity.