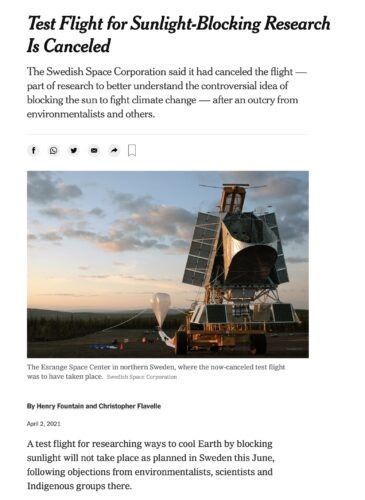 Article on the decision by Swedish Space Corporation to cancel the proposed SCoPEx balloon test flight in Northern Sweden after mobilization by the Saami indigenous people, civil society, and researchers.

The Harvard-based SCoPEx solar geoengineering project unexpectedly announced on 15 December 2020 its plans to conduct at statospheric balloon test flight at the Swedish Space Corporation (SSC) in June 2021, with the stated purpose to prepare for a subsequent flight that would release aerosols into the atmosphere.

Swedish and international civil society together with the Saami indigenous people and Swedish researchers mobilized to counter these plans with the arguments that stratospheric aerosol injection (SAI) is inherently dangerous and that real-world experimentation should not proceed in the absence of global consensus.

In a letter to the Scopex Advisory Committee sent by the Saami Council also on behalf of the Swedish Society for Nature Conservation, Friends of the Earth Sweden and Greenpeace Sweden they highlighted that

[F]or example, risks for devastating, unintended impacts on global weather patterns and ecosystems, including food and water supplies for billions of people; irreversible technology lock-in over millennia to avoid the danger of termination shock; impossible requirements for continuously functioning and centralized governance regimes over hundreds and thousands of years; risks of weaponization and new, unmanageable geopolitical tensions, and not least, unavoidable moral hazard effects that could cause the world to miss its chance to incur rapid, transformative changes in time

The letter furthermore states that

SCoPEx plans for Kiruna constitute a real moral hazard, and threaten the reputation and credibility of the climate leadership Sweden wants and must pursue as the only way to deal effectively with the climate crisis: powerful measures for a rapid and just transition to zero emission societies, 100% renewable energy and shutdown of the fossil fuel industry.

After increasing pressure and mobilization against the SCoPEx plans, the SSC announced on 31 March 2021 that they are canceling the June test flight.

In this article in New York Times Niclas Hällström, WhatNext? was quoted saying “The mobilization against this project in Sweden has been remarkable, uniting scientists, civil society and the Saami people, against the danger of a slippery slope toward normalization of a technology that is too dangerous to ever be deployed,” and that “that no amount of engagement would persuade those opposed to the project that it should move ahead“.