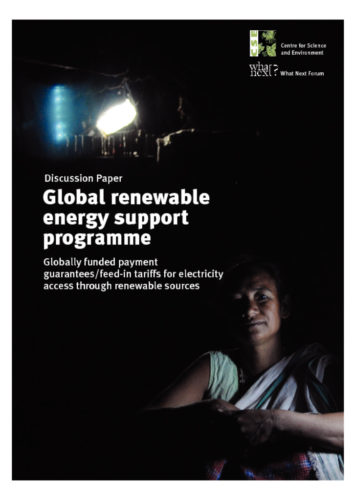 A discussion paper on Globally funded payment guarantees/feed-in tariffs for electricity access through renewable sources produced by WhatNext? and Centre for Science and Environment in the lead-up to COP14 in Lima, Peru 2014.

The world needs bold, transformative solutions that can bend the present trajectories of sustained, and even worsening, energy inequalities while simultaneously addressing the escalating threats of climate change. We need real political leadership that can implement grand solutions, but in ways that allow and stimulate real people on the ground to build locally appropriate solutions for power generation from below. We need a different mode of conversation than the distrustful and non-imaginary impasse we are currently locked in, and that colours climate negotiations and much of international debates. And we need different development models that emphasise well- being, sufficiency and creativity.

This discussion paper on a Global Renewable Energy Support Programme presents one such approach. It is not the single answer – a silver-bullet – to all our problems, but it could, if implemented well, have a considerable impact at several different levels.

It could provide a roadmap for access to affordable, clean electricity to all the 1.3 billion people currently lacking any access and the more than double who have a bare minimum. It could help promote a new, modern, decentralised energy model where people everywhere – in rural and urban centres – become more closely connected to energy production, and societies everywhere rid themselves of dependence on large, centralised and dirty fossil fuels.

It could help rebuild trust between North and South, by providing an example of a truly collaborative scheme with countries of the South in the driving seat. If initiated successfully, it could spur interest in similar bold, visionary public investment approaches in other sectors.

Much is already happening. Several countries, including the Africa Group,1 are promoting this idea within the United Nations Framework Convention on Climate Change (UNFCCC)space. Civil society is increasingly getting interested and is beginning to see this idea as one of the major outcomes of COP21 in Paris a year from now.

Having promoted this idea for several years, it is encouraging to note the interest that is building up, and to help foster the continued elaboration of, and support for, the idea.

This discussion paper seeks to provide an overview of the various components of the detailed design options to serve as a basis for further discussions. It also seeks to generate further political support so that real action and implementation can take place in the months and years to follow.

The paper follows a logic of first outlining the needs and visions, thereafter presenting the modern, decentralised, renewable energy model, highlighting the importance of payment guarantees and feed-in tariffs as key policy tools, and, in the second part, elaborating how international public financing is essential and can be set up to support all developing countries’ quest for renewable energy and universal access to electricity. The paper ends with discussions on risks and safeguards, and concrete next steps.

The paper makes an argument at two levels simultaneously. At an overarching level it makes the case for the creation of global partnerships and the need and obligation of rich countries, with the Green Climate Fund as one central component, to finance the leveraging that is needed to enable a renewable energy transition in developing countries. At a more detailed level, it makes a strong case for so called “payment guarantees” and “feed-in tariff” systems to constitute the key policy tools that could drive much of such a transition. “Globally funded feed-in tariffs” or “G-FITS” therefore easily becomes shorthand for what we are presenting, but are clearly a subset of a larger approach.