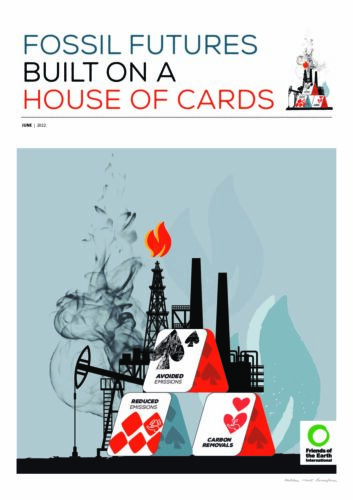 Fossil Futures Built on a House of Cards

This report by 32 civil society organisations, led by Friends of the Earth International exposes the fallacies and dangers of carbon markets, off-sets and "net-zero".

The actors invested in extending the fossil fuel era and protecting the value of their fossil assets use an array of strategies to delay real action to tackle climate change. While their strategies take the place of outright climate denial, the convincing and complex house of cards that they have built is a highly dangerous distraction from the much-needed emissions cuts and transition to clean energy. The outcomes will be the same—’fossil futures’—with continued proliferation and entrenchment of economies based on fossil fuels.

One greenwash tactic is the ‘net zero’ or ‘climate neutrality’ claim. This relies onanassumptionthatcontinued emissionscanbe‘balanced’bythe removal of carbon from the atmosphere. Many actors also assume that they can achieve this balance through buying carbon offsets.

But the assumption that carbon offsets can balance out continuing emissions is erroneous. Operating on that assumption will lead to an increase, not a decrease in emissions.

For carbon offsets to serve as green cover for the fossil futures being imagined by these actors—fossil fuel corporations, other major emitters, and the banks and investors wishing to rescue their stranded fossil assets—everyone needs to buy into a set of untruths:

None of these statements are valid or safe assumptions to make. They ignore scientific evidence around the remaining carbon budget and significant uncertainties and risks around removal technologies. The dire impacts on food production and ecosystems predicted in a situation of temperature overshoot will still happen. Large-scale food insecurity, hunger and starvation are likely, and recovery is not assured. Ecosystem loss and species extinctions are not reversible.

The types of natural carbon removals that are currently available (sometimes referred to as ‘nature-based solutions’) have a conveniently green image. This is used as a smokescreen for where the imagined removals might come from some day: land- and geo-engineered approaches (sometimes referred to as ‘carbon unicorns’). Some of these are only available now at a pilot scale, and others still completely speculative. They are all packaged together to promise great sums of future removals— someday, after overshooting 1.5°C by a certainly deadly margin.

With COP26 giving the green light to new global carbon markets, more countries chasing ‘net zero’ targets, new shipping and aviation offset schemes, and fossil fuel corporations greenwashing their continued emissions with dodgy nature-based offsets, demand for offsets is forecast to skyrocket. The architects of the effort to scale voluntary carbon markets assert that the voluntary market will need to grow 15-fold by 2030, clearly because the drivers of this market work under assumptions of continued dependence on and burning of fossil fuels.

As with any market, offsets markets must be constructed; invisible carbon emissions must be somehow turned into a commodity, ideally an asset in which investors have confidence. Market players like the Task Force on Scaling Carbon Markets (TSVCM), and the Architecture for REDD+ Transitions (ART) are seeking to harmonise and standardise what counts as an offset credit, with the ostensible goal of improving credit ‘quality’ and market confidence. Their strategy is to blend ‘carbon removals’ and ‘avoided emissions’ into a single credit unit, making them appear the same and in the process greatly enlarging the possible supply of offset credits to fuel fossil futures. Yet, avoided emissions projects do nothing to compensate for ongoing emissions, and the word ‘offset’, in the sense of ‘compensate for’, should not even be used to describe them. This basic physical fact is obscured if all offsets are made equivalent.

In this process, the actors behind these initiatives are building an elaborate house of cards that is being used, along with the fairy tales of carbon-neutrality and ‘net zero’ fossil futures, to enable fossil-based capitalism to carry on unimpeded. A carbon-offset market can only lead to more warming. It provides an excuse for continued emissions by the political and polluting elite.

It is also clear that actors involved in the construction of the market have intents beyond mere offsetting: they are also planning for the expansion of trading and profit-making options to secondary markets and derivatives (e.g. futures and swaps) markets. Derivatives markets are dominated by financial speculators. More complexity means more possibilities for speculation.

Fossil futures rely on political and economic power as well as a set of compelling narratives to make it seem as if there is no alternative to fossil- fuelled economies. The house of cards that is the carbon offset market contributes to the economic and narrative power of those futures, but its greatest threat to our efforts to tackle climate change are the real material consequences of trading in offsets that do nothing to reduce emissions. When actors rely on offsets rather than reducing their emissions at source, global emissions continue to rise. The work to obscure the difference between ‘avoided’ or ‘reduced emissions’ and ‘carbon removals’, by market actors seeking to expand the market, will contribute to climate disaster.