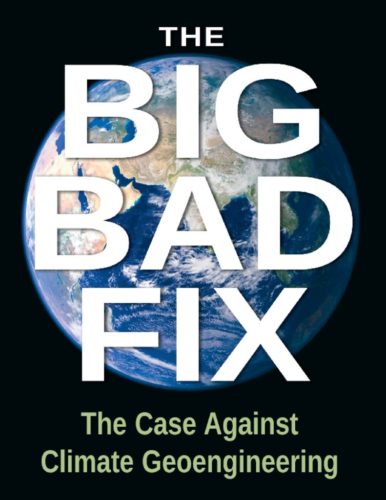 Comprehensive report published by ETC Group, BiofuelWatch and Heinrich Boell Foundation presenting the case against geo-engineering. As the report details, each of the proposed geoengineering technologies threatens people and ecosystems. Holistic assessments of the technologies also show that if deployed they are highly likely to worsen rather than mitigate the impacts of global warming.

Conents of the report:

Chapter 1: Geoengineering: The Emperors’ New Climate
A New, Environmental Empire; Empire’s Techno-fixes
Does the Emperor have Clothes? Empirical Hubris in History
A “Climate of the Willing”?
The Emperors’ new hose?
Safe, fair and ecologically sustainable solutions to the climate crisis

Chapter 7 – The Way Forward
A radical realism; The norm is a rejection of geoengineering
Maintain and reinforce the moratoria; Stop open-air experiments
Work for a ban; Broad societal debates, broad frameworks; Hands Off Mother Earth!